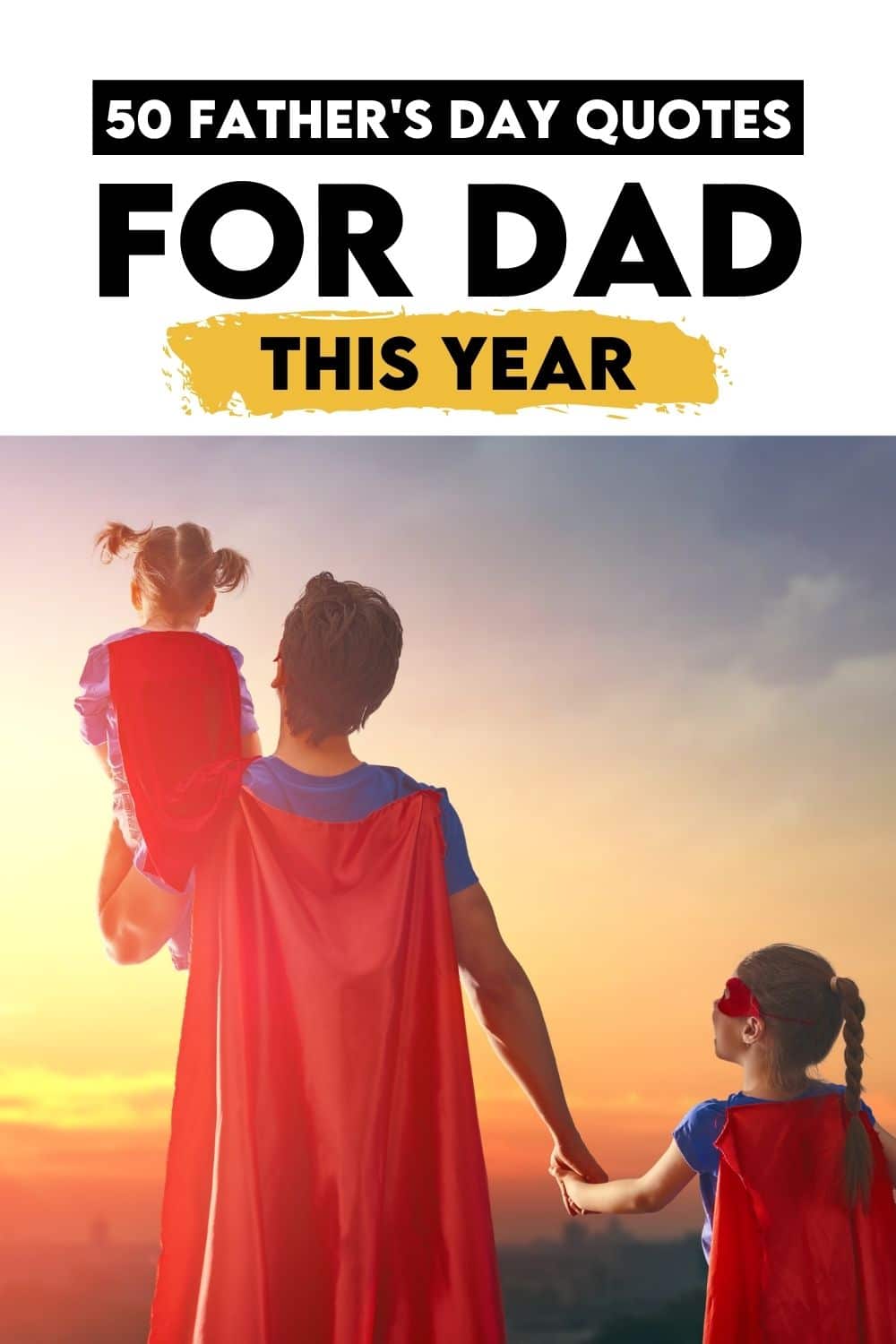 Looking for some amazing Happy Father’s Day quotes for a card for dad this year? Look no further! We’ve scoured the internet to find our top 50 favorite quotes about dads that we just know you’re going to love! We’ve got sweet quotes, funny quotes, dad quotes from daughters or sons, and absolutely everything in between!

We’ve separated our collection of dad quotes for easy browsing:

If you’re looking for sweet and sappy Father’s Day quotes, you’ve come to the right place! Show dad how much you love and appreciate him with one of these endearing quotes.

1. “Some people don’t believe in heroes, but they haven’t met my dad.” -Unknown

2. “It doesn’t matter who my father was; it matters who I remember he was.”-Anne Sexton

3. “Dad, I just noticed the superman you are, instead of the superman I thought you were.” -Vineet Raj Kapoor

4. “It’s only when you grow up and step back from him—or leave him for your own home—it’s only then that you can measure his greatness and fully appreciate it.” -Margaret Truman

5. “I love my father as the stars—he’s a bright shining example and a happy twinkling in my heart.” -Terri Guillemets

6. “When my father didn’t have my hand, he had my back.” -Linda Poindexter

7. “A father is someone you look up to no matter how tall you grow.” -Unknown

9. “The only thing better than having you as a dad is my kids getting to have you as a granddad.” -Unknown

10. “The greatest thing a father can do for his children is love their mother.” -Anjaneth Garcia Untalan

There is such a special relationship between a father and his daughter. Check out these adorable dad quotes that come from a daughters perspective. Can’t help but get emotional reading these!

11. “Being a daddy’s girl is like having permanent armor for the rest of your life.” – Marinela Reka

12. “There’s something like a line of gold thread running through a man’s words when he talks to his daughter, and gradually over the years, it gets to be long enough for you to pick up in your hands and weave into a cloth that feels like love itself.” -John Gregory Brown

14. “A daughter needs a dad to be the standard against which she will judge all men.” -Gregory E. Lang

15. “To her, the name of father was another name for love.” -Fanny Fern

16. “It is admirable for a man to take his son fishing, but there is a special place in heaven for the father who takes his daughter shopping.” –John Sinor

17. “[My father] always provided me a safe place to land and a hard place from which to launch.” -Chelsea Clinton

18. “She did not stand alone, but what stood behind her, the most potent moral force in her life, was the love of her father.” -Harper Lee

Is there a bigger hero to a son than his dad? Check out these sweet and sentimental Father’s Day quotes about fathers and sons.

19. “My father gave me the greatest gift anyone could give another person, he believed in me.” -Jim Valvano

20. “I decided in my life that I would do nothing that did not reflect positively on my father’s life.” -Sidney Poitier

22. “If there is any immortality to be had among us human beings, it is certainly only in the love that we leave behind. Father’s like mine don’t ever die.” -Leo Buscaglia

23. “Lately, all my friends are worried they’re turning into their fathers. I’m worried I’m not.” -Dan Zevin

25. “By the time a man realizes that maybe his father was right, he usually has a son who thinks he’s wrong.” -Charles Wadsworth

26. “My father didn’t do anything unusual. He only did what dads are supposed to do—be there.” -Max Lucado

27. “Life was a lot simpler when what we honored was father and mother rather than all major credit cards.” -Robert Orben

Roll your eyes all you want, but there’s really nothing better than a dad joke! In fact, I think most of the quotes from my own dad are jokes! Try one of these laughable quotes for an extra funny Father’s Day.

28. “There should be a children’s song: If you’re happy and you know it, keep it to yourself and let your dad sleep.” -Jim Gaffigan

29. “Before I got married I had six theories about raising children; now, I have six children and no theories.” -John Wilmot

30. “My dad asked me, Son, have I been a good father? I said, Dad, you’re the best. Why do you ask? He said, I wanted to make sure the way you turned out is your fault.” -Stu Trivax

31. “Raising kids may be a thankless job with ridiculous hours, but at least the pay sucks.” -Jim Gaffigan

Fatherhood Quotes To Make Him Smile

Everything changes the moment you become a parent. These wise quotes perfectly sum up fatherhood! Use them inside a card, in a little handwritten note, or as part of a social media post! Wish that dad of yours a Happy Father’s Day with one of these meaningful quotes this year.

32. “What a father says to his children is not heard by the world, but it will be heard by posterity.” -Jean Paul

33. “Dads are like chocolate chip cookies; they may have chips or be totally nutty, but they are sweet and make the world a better place, especially for their children.” -Hillary Lytle

34. “I feel more and more like ‘myself’ these days. Before becoming a father, I can remember a low-level feeling of somehow not quite being myself.” -B.D. Wong

36. “Every father is the architect of his home life.” -Reed Markham

37. “Anyone who tells you fatherhood is the greatest thing that can happen to you … they are understating it.” -Mike Myers

38. “The imprint of a father remains forever on the life of the child.” -Roy Lessin

39. “A father’s words are like a thermostat that sets the temperature in the house.” -Paul Lewis

40. “A truly rich man is one whose children run into his arms when his hands are empty.” -Unknown

41.“Being a great father is like shaving. No matter how good you shaved today, you have to do it again tomorrow.” -Reed Markham

42.“A man’s worth is measured by how he parents his children. What he gives them, what he keeps away from them, the lessons he teaches and the lessons he allows them to learn on their own.” -Lisa Rogers

43. “The only way I can describe fatherhood—it sounds stupid, but—at the end of How the Grinch Stole Christmas, you know how his heart grows like five times? Everything is full; It’s just full all the time.” –Matt Damon

45. “Becoming a father increases your capacity for love and your level of patience. It opens up another door in a person, a door which you may not even have known was there.” -Kyle MacLachlan

46. “By profession, I am a soldier and take great pride in that fact, but I am also prouder, infinitely prouder, to be a father. A soldier destroys in order to build; the father only builds, never destroys.” -General Douglas MacArthur

48. “I believe that what we become depends on what our fathers teach us at odd moments when they aren’t trying to teach us. We are formed by little scraps of wisdom.” -Umberto Eco

49. “A father doesn’t tell you that he loves you. He shows you.” -Dimitri the Stoneheart

50. “The nature of fatherhood is that you’re doing something that you’re unqualified to do, and then you become qualified when you do it.” -John Green

So, what do you think of our collection? Are you in tears yet? Pick your favorite Happy Father’s Day quote for dad this year, and you’re sure to make him smile!

Whichever quote you pick, we hope you celebrate your dad in style this Father’s Day!! 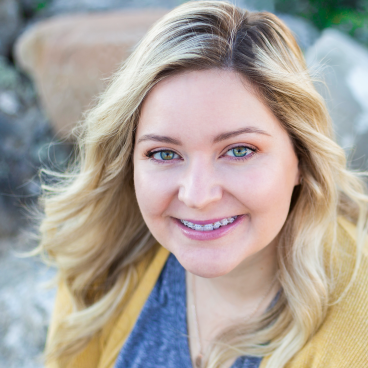 I am a cookie & literature loving mom of three and wife to the best person I've ever met. I get my kicks from writing whenever and whatever I can. If you need a book recommendation, I am your girl! I often find myself daydreaming about buying all the items in my "saved for later" cart on Amazon. Oh, and I also drive a school bus, which is pretty cool. 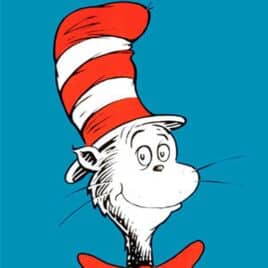 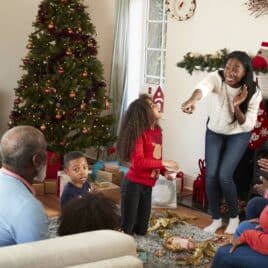 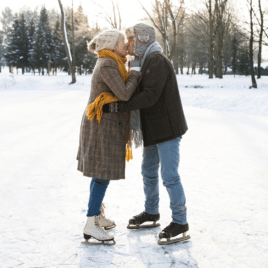 75 Quotes About Winter You Will Love