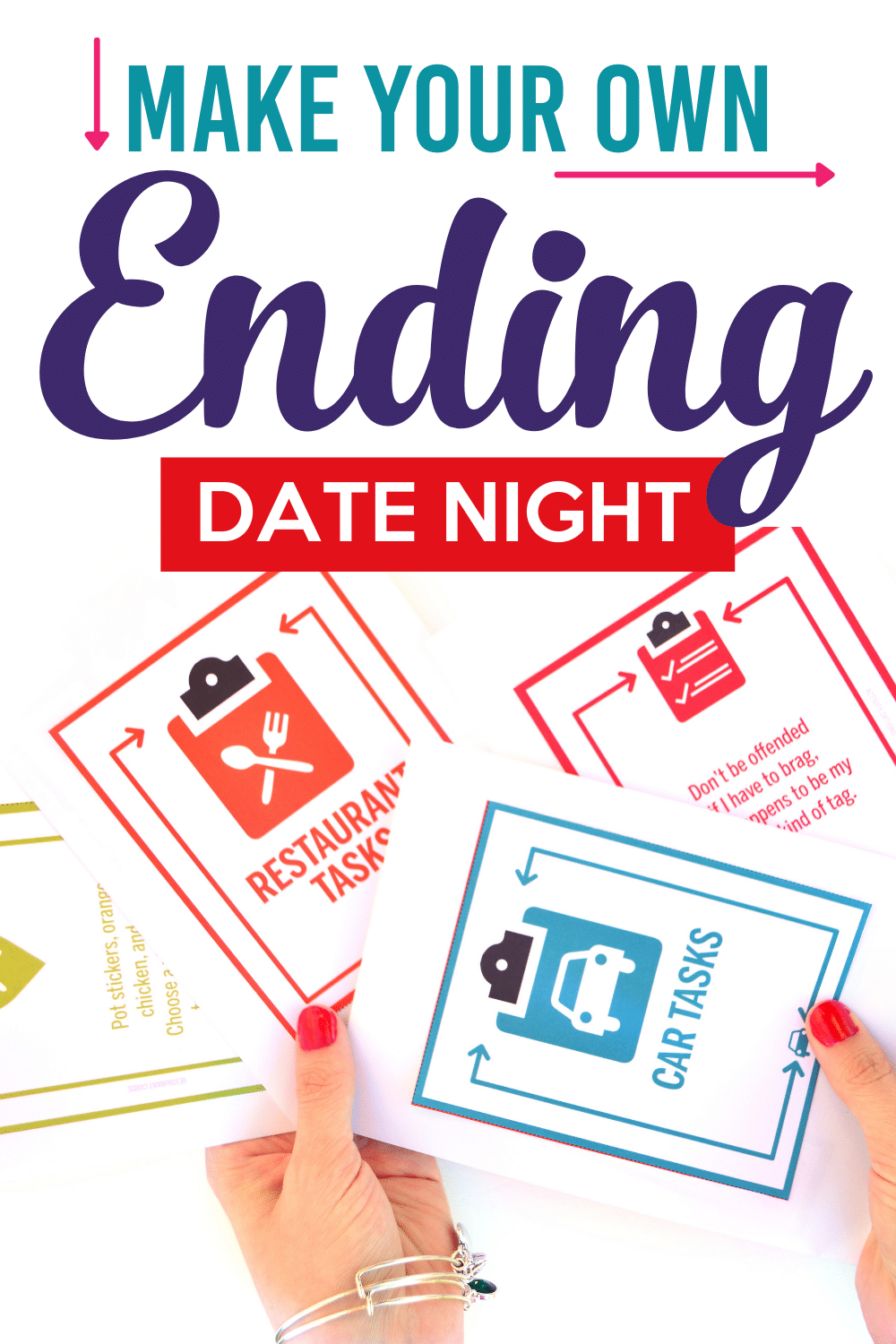 What Adventure Do You Choose?

I love a good date night adventure, but I also love books, so I put the two together! This date was inspired by the “pick-your-own-ending” books I used to read in elementary school. I was a pretty outgoing kiddo… but I was also SUCH a bookworm! 🙂 Seriously! Even now when I pick up a book, the whole world disappears and my husband has to say my name at least four times before he can get me to respond! Ha! With that in mind, I created a date that would allow my husband to be the STAR and would give us lots of options for future dates as well.

Before I tell you about this adorable date, you HAVE to go check out our Pick Your Date Adventure APP! YES an APP that, through a series of prompts and questions, delivers you the perfect date! The convenience can’t be beaten and the dates are BEYOND amazing. Check it out HERE!

How to plan a Date Night Adventure

Now, on to this date night adventure!

First the INVITE!! The wording was “fashioned” after the wording that is on the books. Just print it onto white cardstock. We also included a few extra invites so that you can invite your friends!

My husband, Jamie, LOVED it!

We invited four couples over to our house & once everyone had arrived – we (the wives) handed the husbands FIVE envelopes. On the front of each envelope was a poem about a restaurant. The guys had to read the poems aloud and figure out WHICH restaurant the poem was about. They were then allowed to open the envelope of the place they all wanted to eat and that is where we headed.

Each girl made up a poem/riddle/clue (in advance) for a place they knew their husband would love to eat. The choices were: Cafe Rio, Fudruckers, Island’s Restaurant, Pei Wei, & Farmer Boys (…we were trying to keep it a “low-budget” night…). Because we know that not every town has these same restaurants we made it a little broader, so you have a little poem about a burger joint, Chinese food, Mexican, pizza, and a sub shop. Then you fill out whatever restaurant fits your needs on a little card and slip it in the envelope.

After the guys figured out all of the clues… they couldn’t decide which place they wanted to go to – they liked them ALL! My husband finally put the top three choices on the ground and called our little Yorkie to come over. The envelope Jaxston (our dog) walked up to was Island’s Restaurant!

We then divided up into two groups for the drive over. Since this is an ADVENTUROUS date we had to do something fun in the car on the way to our restaurant, right?!? Each driver was handed an envelope full of “Car Tasks.” At each stoplight, we took turns pulling out a task to complete. It was HI-LA-RI-OUS!!! 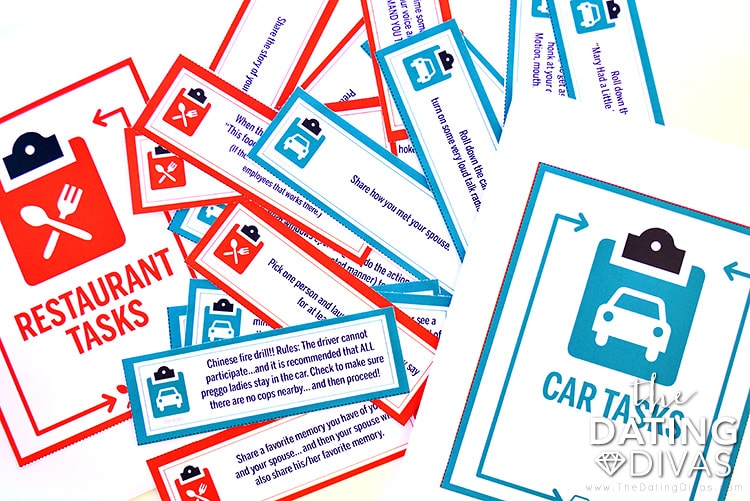 I tried to take pictures of the others doing their tasks. In our car, we decided it would be more fun if we ALL did each task. Here are some pictures of the different ones we had to do (you may need to click on the pictures to make them bigger): 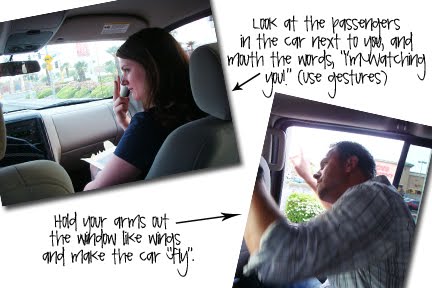 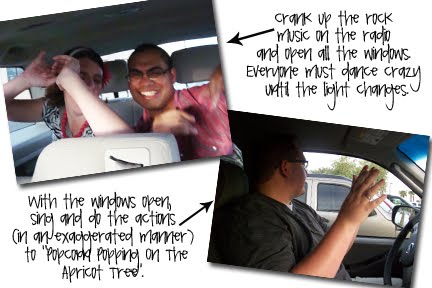 (A HUGE thanks to the other girls AND my CUTE sisters for coming up with a lot of the tasks!)

We received a lot of fun AND funny reactions from people in other cars. Some people in one car even started dancing along with us!!

Make Your Own Ending Restaurant Tasks

After our eventful car ride to the restaurant, we arrived, were seated, and ordered our SUPER yummy food. I then introduced the “Restaurant Tasks” envelope. Each person had to choose at least one task out of the envelope and complete it sometime during our meal. 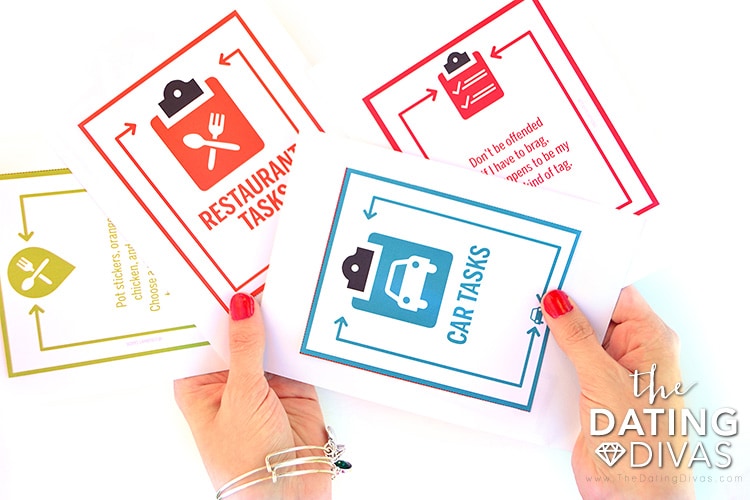 It was SUCH a hit that the group decided to try two tasks each. I didn’t get any of the pictures of the tasks because most of them were verbal, but I CAN say that we were laughing a ton! Here are a few of them: 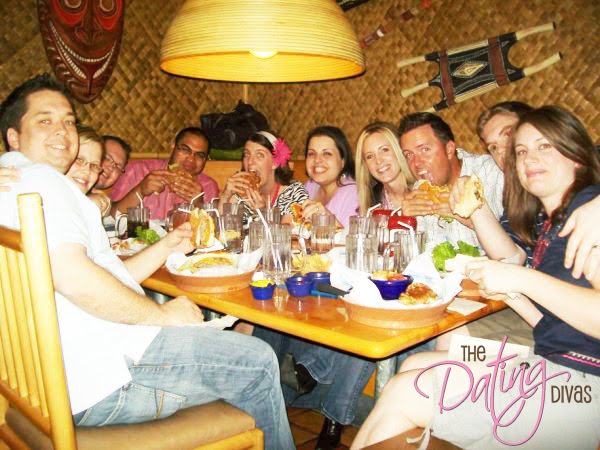 I have to tell you a little bit about ONE of my tasks! The task was:

Go over to another table, ask them how their food is and if they are enjoying their dinner. Perhaps you can offer to take their plates/trays if they are finished.

I chose a table consisting of two parents and a child. It looked like they were just finishing up… PERFECT! My group was all done, and I was hoping that I could quickly complete my task and then we could all walk…er… sneak out.

I walked up to their table and asked how their meal was. They looked at me, a little puzzled (probably because I wasn’t wearing the standard uniform) and told me that they really enjoyed their meal. I then asked if they needed anything before they left. They replied that they were just fine, but thanks. I was soooo relieved!

I turned around to see our group trying to stifle laughter and we all quickly walked out. THEN – as we were standing in front of the restaurant, chatting it up before heading to the two cars, that FAMILY walked out!! My husband spotted them and loudly on purpose) proclaimed, “Hey! There’s the family whose table you went up to!!” Totally his personality to do something like that! The pill…

The family came over and we chatted with them for a minute – I told them that they were part of a game we were playing and I thanked them for being such good sports. They thought it was pretty funny as well, but told me that they were a little confused because they hadn’t seen me all night! The wife asked what I would have done if they had actually asked for something. I let her know that I would have passed it along to their waiter. 🙂 Overall, the ”Restaurant Tasks” were a blast and it kinda reminded me of the game, “Curses.” (If you have never played that game – I totally recommend it!)

Pick your own Ending Game Tasks

Before leaving the restaurant – the guys were given FIVE more envelopes with clues/riddles on the outside pertaining to different activities we could do. Their choices were: Laser Tag, Miniature Golf, Rock Band, Game Night, or watching the dueling pianists at the Paris Casino downtown. You can see which choice was the popular one… 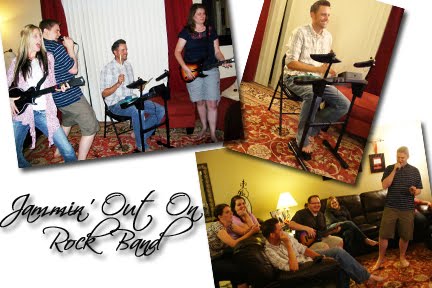 We headed back to our place and had a blast playing Rock Band. To help it apply to your town we kept most of our options: Laser tag, mini-golf, Rock Band (or a concert if you have live venues). Then we added a couple more: a game night with ice cream and a movie night!

Right before the date ended, I was able to snap a photo of the guys with their adventure choices…. 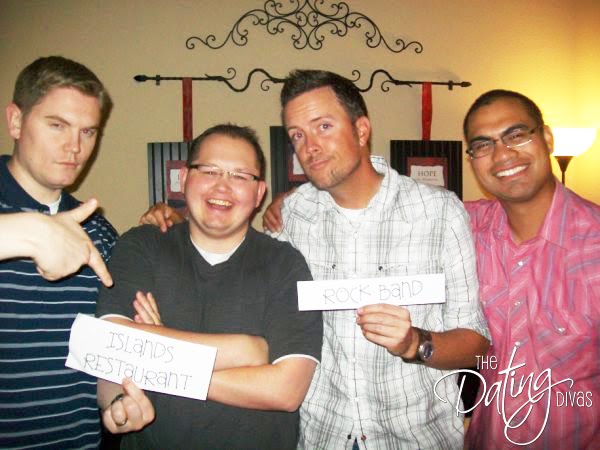 If you are looking for a way to do this date with JUST your sweetie, we also included a flip chart version for the 2 of you!

It’s the same concept and clues, just on a chart that your honey can flip through. There are instructions on what page to go to depending on their choice – just like in the books I LOVED to read! Enjoy!!! 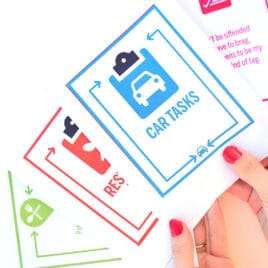 Make Your Own Ending: Envelope Edition 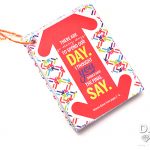 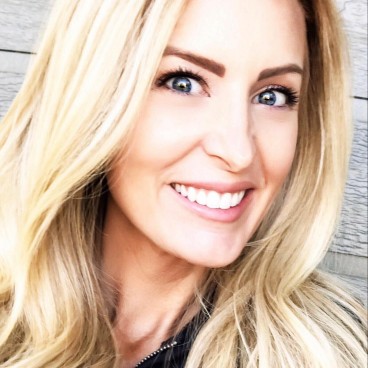 I am an outgoing and fun-lovin’ gal who was lucky enough to marry the man of my dreams! You could probably say I am an “extreme extrovert” as I LOVE to talk and be around people! I love ANYTHING creative and am not a fan of the “norm.” My favorite things in life are my family… especially my HOT husband, my friends, and my faith! After a long infertility journey, we brought two miracle babies into this world via IVF and we now have a surprise miracle baby boy joining us this Christmas. I have a passion for life and I am having a BLAST running this website with some of my closest friends. Life just keeps getting better and better! 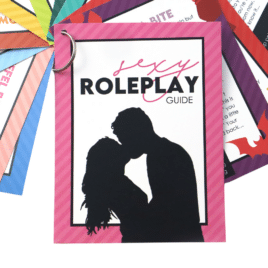 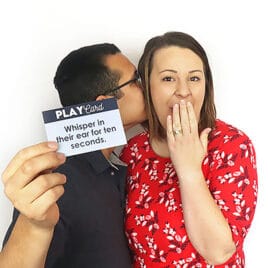 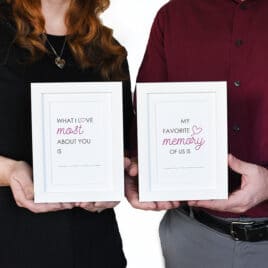