Making dollar bill origami is a delightful way of showing your spouse (or someone special in your life) a little extra love! However, you can easily use a rectangular piece of origami paper for a colorful look as well!

Check out this EASY 10-step guide for how to make a dollar bill origami heart! 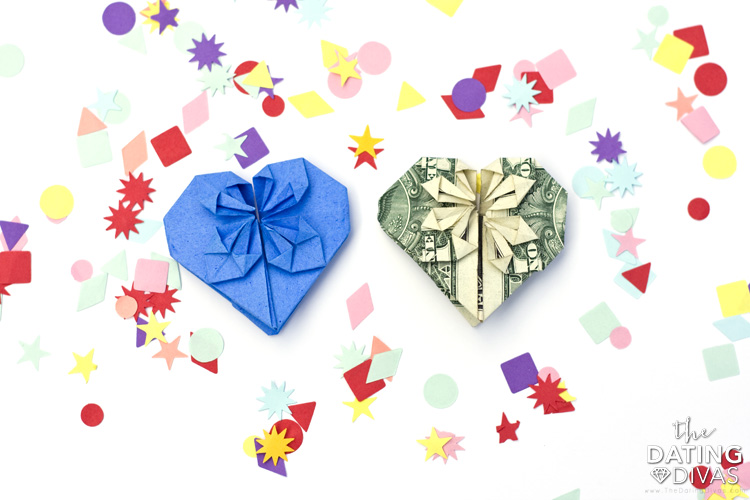 Start with either a crisp, paper bill, or a rectangular piece of paper. 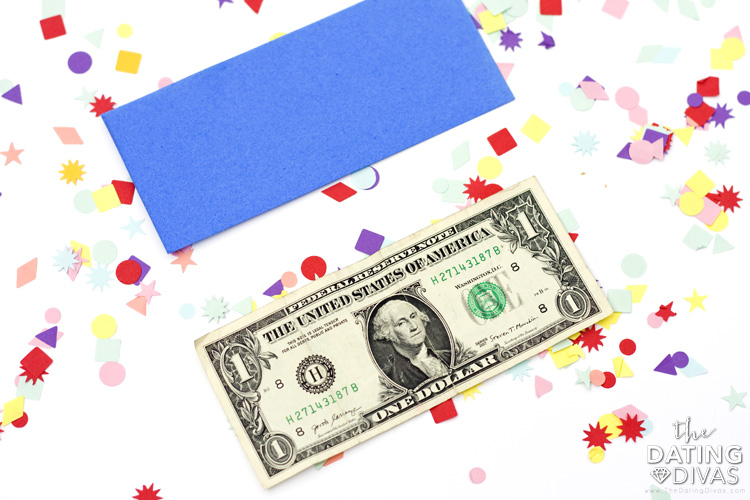 How to make an origami heart with rectangular paper.

Fold the corner of the paper diagonally to the opposite side. After it’s creased, unfold it. 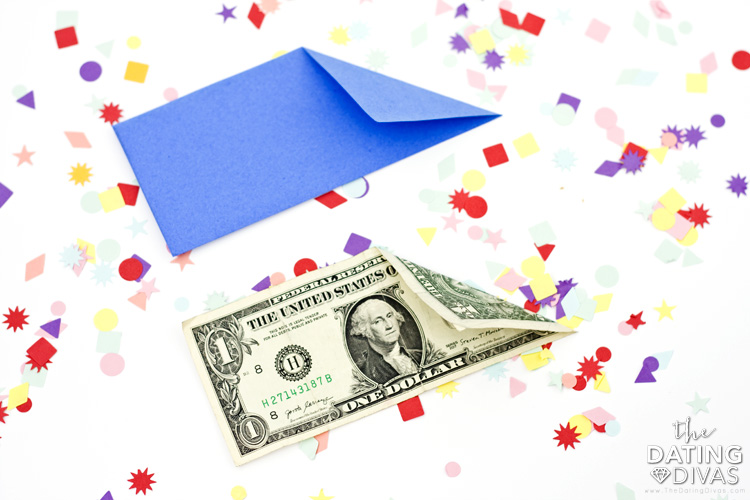 Make creases in your dollar bill.

Now, fold the other corner diagonally to the opposite side. After it’s creased, unfold it. 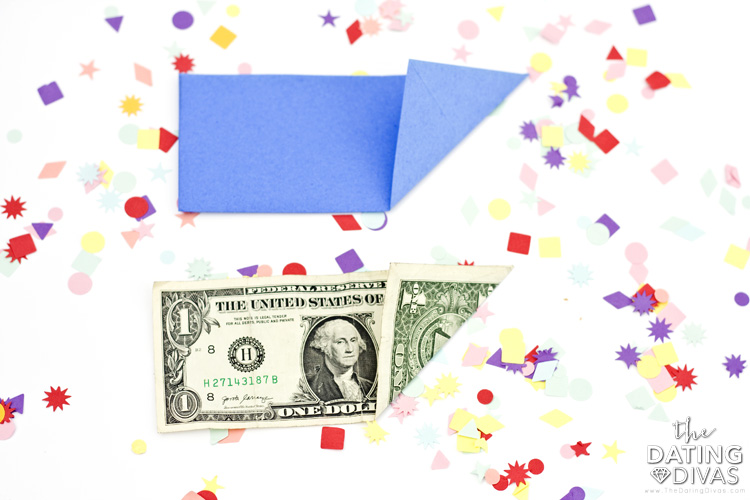 Fold and crease the other corner of the dollar bill.

Using the creases, pinch the sides of the dollar bill together, as shown below. 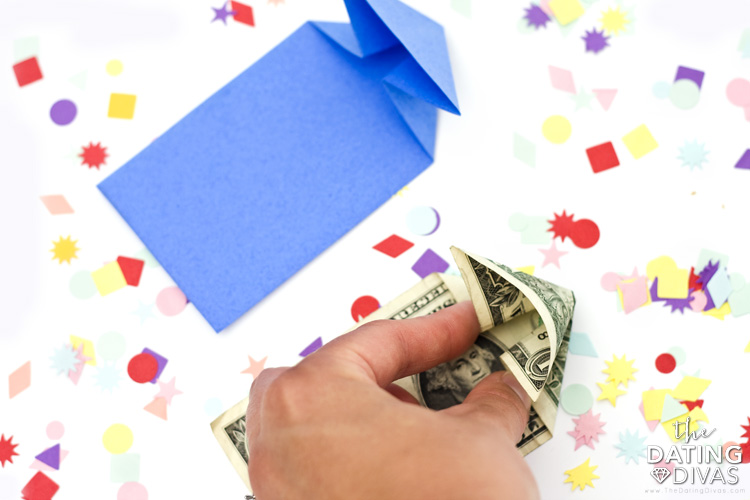 Pinch the dollar bill together to form an arrow shape.

Press from the top to crease into a triangle shape, when looking from above. It may not look like it yet, but you are well on your way to making your origami heart. 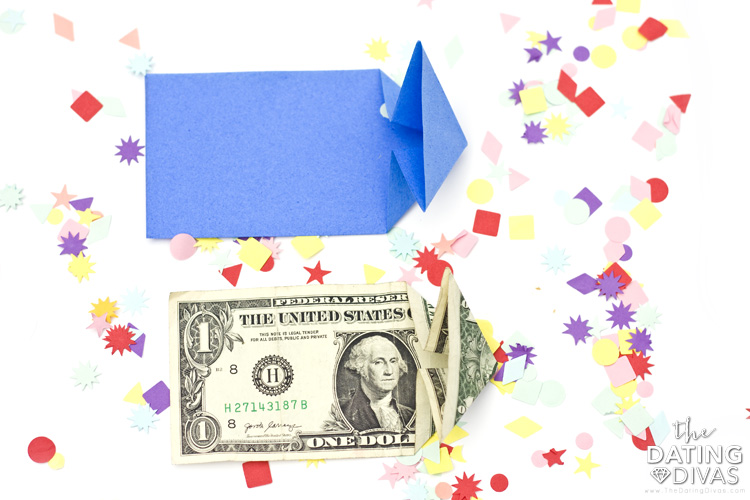 Create an arrow shape with the origami paper. 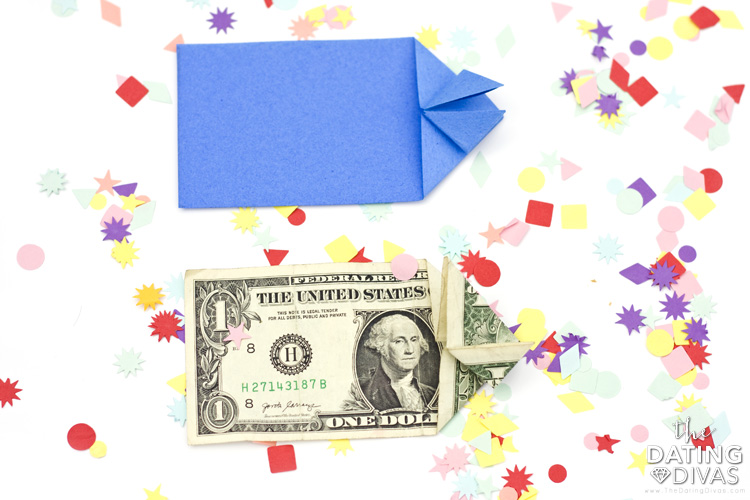 Place your finger in between the top and bottom layers of the most recent fold. Now, push on the top corner, squashing it down to make a square shape. 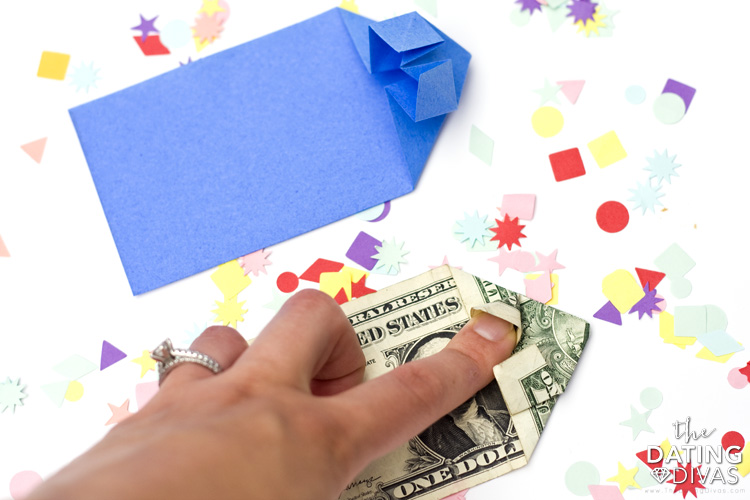 Squash the folds open to reveal a square shape.

Repeat for the other fold, creating two squares, side-by-side. 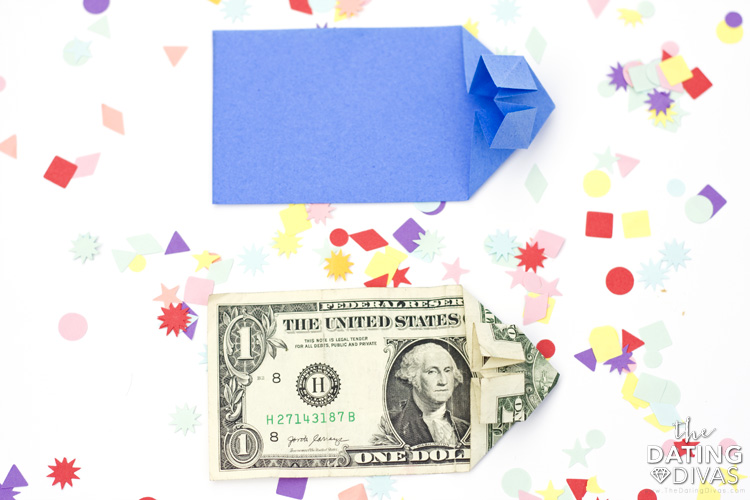 Grab the free corners of the square and crease each side to the center, creating a kite shape. 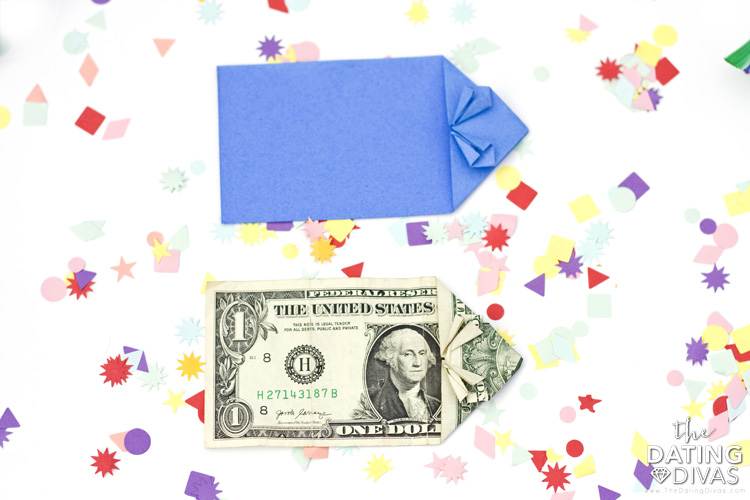 Next, do another squash fold by carefully opening up the two layers you just creased and pushing down on the top point. Be careful to line up, and crease symmetrically, as shown below. 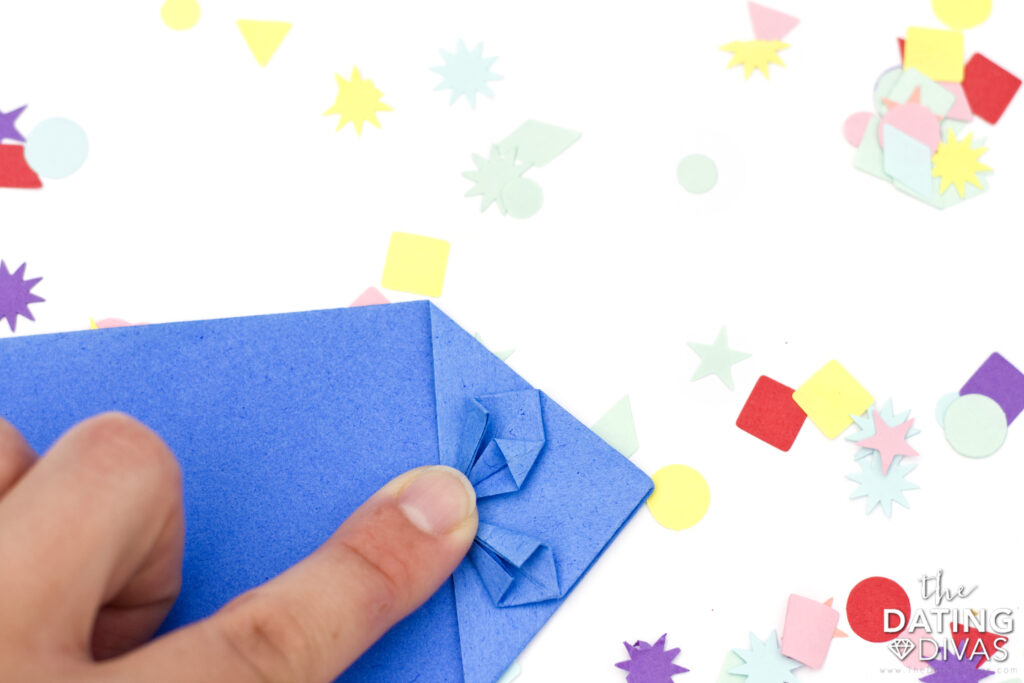 Creating the inside detail of the origami heart.

Repeat the process of opening and squash folding until all 4 kites have been creased open. 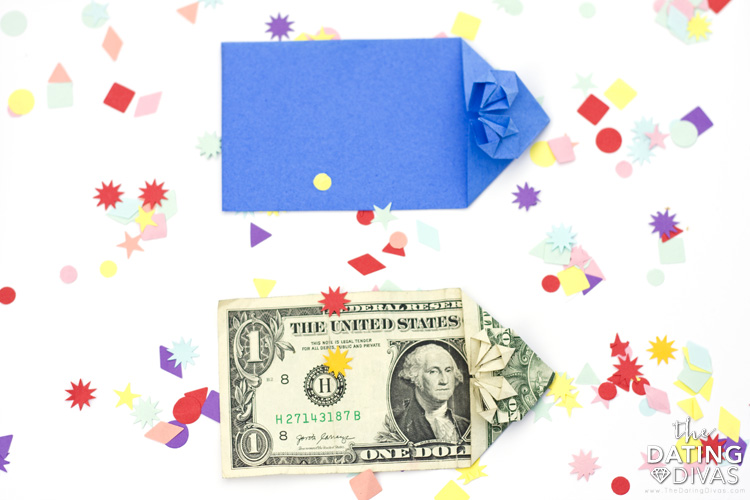 Showing how to make an origami heart with rectangular paper.

Repeat steps 1-5 on the other side. You will be creating two identical sides, as shown here. 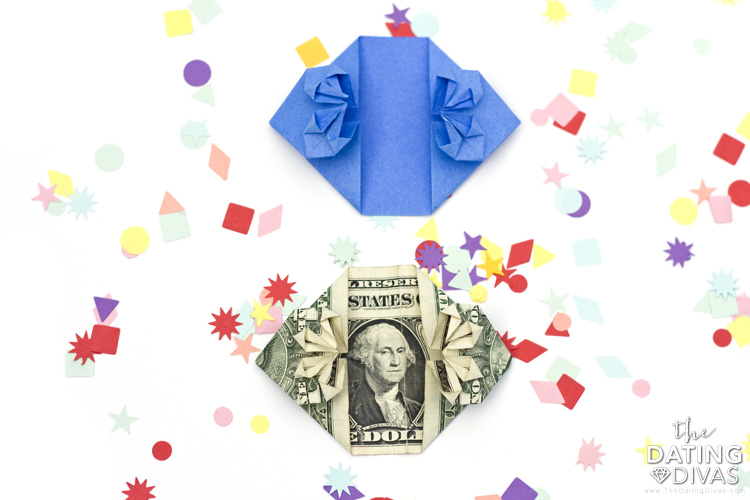 Repeat the above steps 1-5 on how to fold a dollar into a heart.

Now that you have two symmetrical sides fold the left side backward at the base of the triangle. 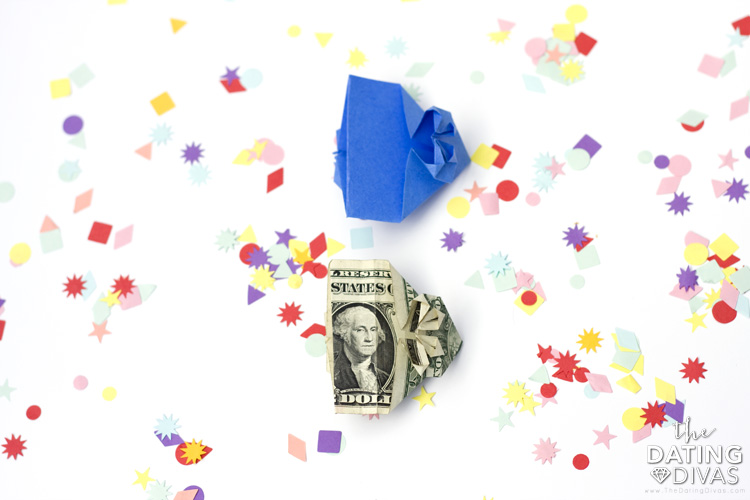 Fold one side backward.

Next, grab the two corners of the fold you just made and pull them to align with the other side. 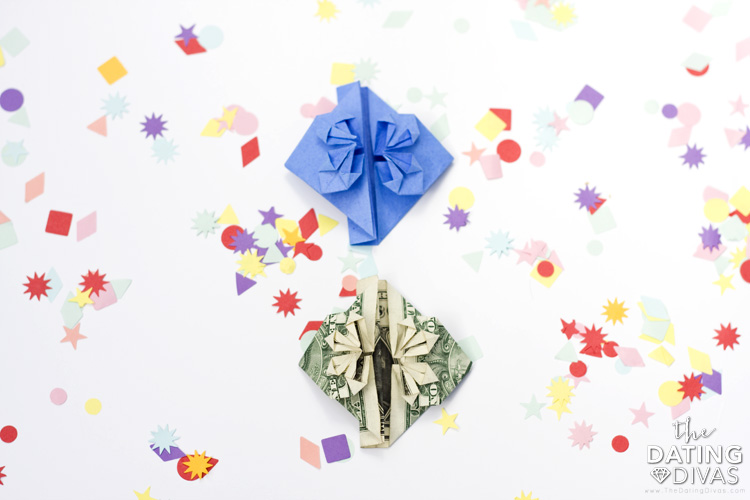 Fold the two sides so they are now touching.

Here is a back view of the fold you just made above. You’re almost done with your origami dollar heart! 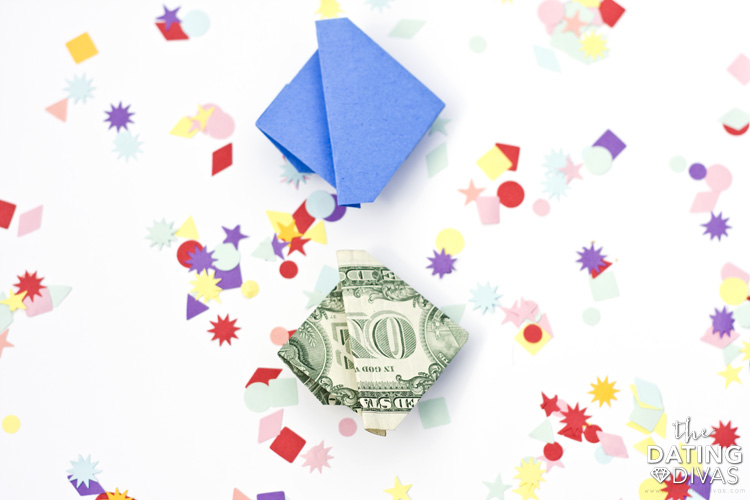 Back view after the two sides are folded to line up.

The next step for your dollar bill origami heart is to fold in the little flaps that are sticking out in the back. 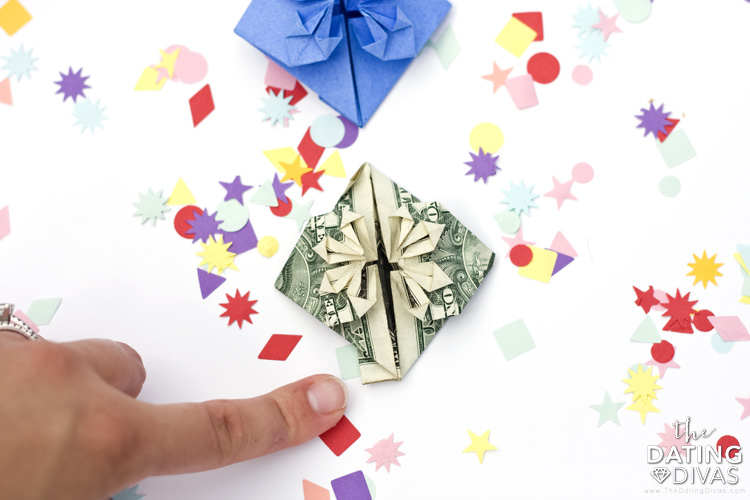 Grab these little flaps sticking out and fold them under.

Fold the flap over so it lines up with the outer edge. Now, tuck it into the center of the two layers, so it is not visible. 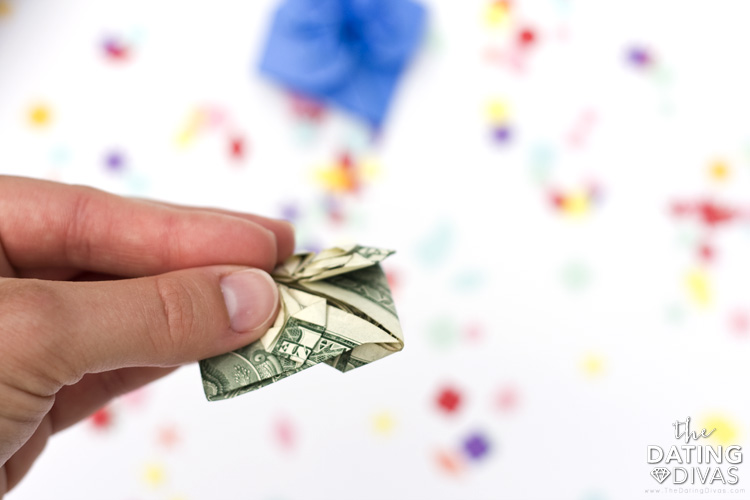 Tuck the triangle flap in between layers.

Flip your dollar bill origami heart over and fold the top point down to the bottom point. Crease it well!

Fold the top point down to meet the bottom point.

Flip it back over for the last step. You’re almost finishing learning how to make an origami heart!

The last step is to simply fold back the pointed edges, shown here. 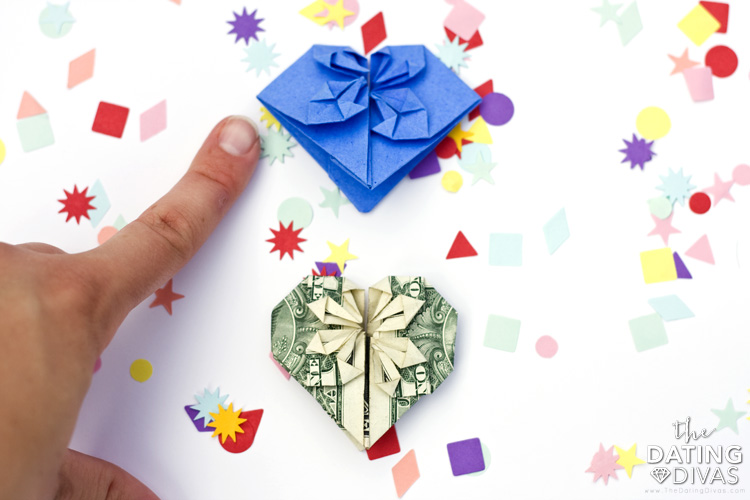 Crease hard, and you are done! To make it look extra formal and fancy, lay a heavy book on top of your dollar bill origami heart for a bit so it appears perfectly flat. 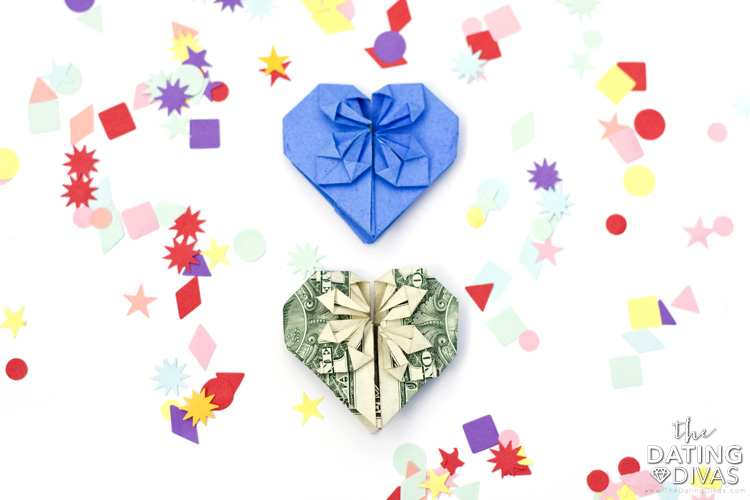 Now you know how to make an origami heart. 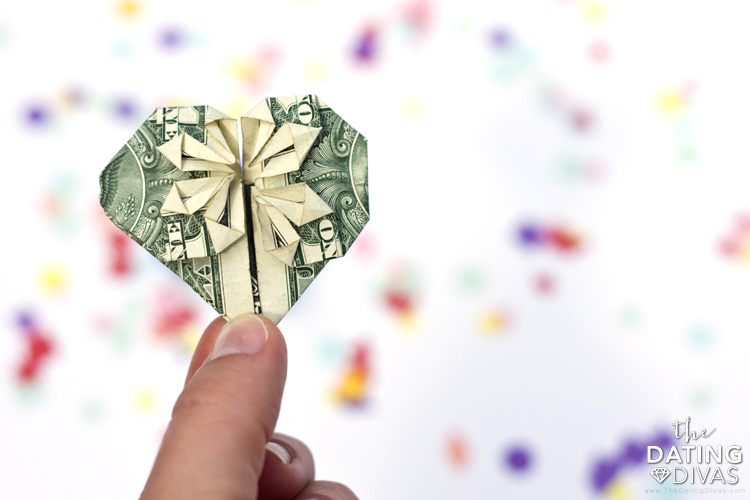 Teach your spouse and tip your server on your next date night with paper money origami!

See! That wasn’t so bad, right? This easy dollar bill origami heart tutorial can now be used for all sorts of reasons! You could leave it somewhere for your spouse to find, such as their pants pocket, in their car, or even just in their wallet. OR, you could even leave it as a tip on your next date night out! 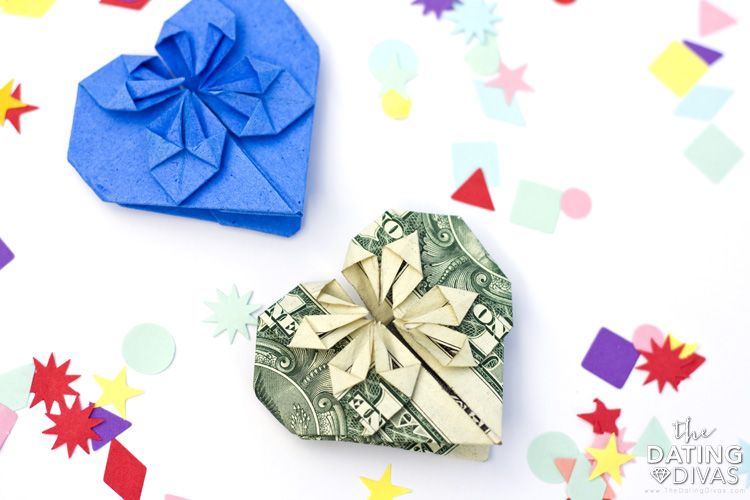 Marriage really is so much about the little things. Making a quick and easy origami heart is just one idea for a little thing you could do to show your love.  Have fun!

Now that you how how to make an origami heart, check out these other creative ways to make your spouse feel loved: 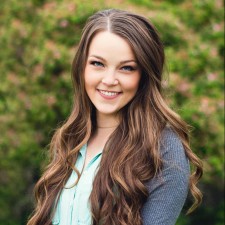 About the Author: Lauren

The great loves of my life are my boys, maple bars, and hand sanitizer. I’ve been married to my very own dreamboat of a soulmate for seven years. We have a completely adored, silly, mischievous son, and a sweet, giggly little girl. I think that there is nothing in the world that's better than laughing so hard you can barely breathe. In our family we have a policy of making that happen at least once a day!

When you sign up for The Divas great weekly ideas!
Your information will *never* be shared or sold to a 3rd party.
814shares